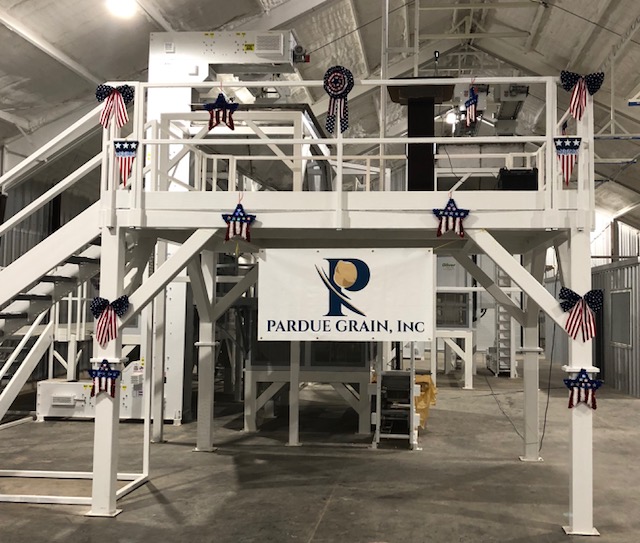 My trip started out with many delays flying into Great Falls, MT. I was traveling at the behest of Pardue Grain, whom invited me to attend its groundbreaking ceremony. I was due to arrive at 9 PM, but did not arrive until nearly 1:15 AM the next day. However, I have learned that we are not in control of a lot of things, and airline flights are one of those. Jokingly, my wife told me that I could have driven there and gotten there sooner.

Then there was the arrival at the hotel. First, the doors were locked. Unless I already had a room key, I could not get through the main entrance. With a quick phone call to the front desk, I felt confident that my long day would end with some rest before the hours-long drive north the next morning. However, when I called to get let in, no one answered. It didn’t take too long, but the front desk person was back up front after about a 10-15 minute delay. She was taking care of another customer so no worries, it was what it was. I finally got checked in and made it up to my floor. Upon leaving the elevator, I looked down the hall and felt like I was in some old movie from somewhere. I took a picture of the hallway and posted it to my Facebook. There were a few folks who responded telling me I took a picture from the classic movie “The Shining.” Yes, this made me feel more comfortable than ever.

All kidding aside, this was an invaluable trip for me. I was honored to receive a personal invitation from Roger Sammons, the owner of Pardue Grains. I went into the event not knowing what to expect, but I felt that being there in support of the customer, the distributor involved, and for Oliver, was important. I arrived early to look at the equipment and the installation.  The work that was being done and the quality that went into the workmanship of the project was quite impressive. Roger and his team worked diligently to ensure the event kicked off well.

I was honored to meet many great people who came from a variety of backgrounds. Some were Pardue employees and others were friends and family members for the Pardue team. There was a strong presence from the farming community and other seed conditioners, as well. There were representatives from local and state economic development. I found that there was also participation from the Blackfeet Nation, the university, state and locally elected officials. My first reaction was that this was an incredibly well attended and represented groundbreaking ceremony.

About 10 minutes before the event started, Roger asked me if I wanted to say a few words at the kick-off. While I don’t mind public speaking, I’ve always found preparation helpful. I learned the other suppliers would get to say a few words as well. I got to kick off the beginning of the event with a brief introduction to me and to Oliver. However, this day was about Pardue Grains, Roger and his team. My words emphasized that and also expressed appreciation for our partners in their efforts to bring this opportunity into a reality.

Afterwards, I was able to sit back with the rest of the folks and listen to the story of how this project came to fruition. I heard about the work of consultants to specify the food grade conditioning facility. I listened regarding all of the partners from universities, USDA, economic development, our agent/distributor, elected officials, Blackfeet Nation, and the Pardue Grain team came together in support of Roger’s vision undertake this project and create value in his community through. The event was also attended by Senator John Tester, and I got to listen to him speak about the real value this project has for the community and state of Montana. It was a real privilege to hear his views on the needs of rural and agricultural communities.

My personal takeaways from this is of honor, hope, and humility. It was an honor to be included in this event and get exposed to what it took to get this project moving forward. This project required a lot of moving parts to endorse and come together to bring this to fruition. If we can in our business or in any other business get this degree of collaboration and support, there is hope for great things to occur. Humility in that I am just one person in this large world. As an individual, I can accomplish a lot, but nowhere near what was accomplished as a result of all the supporters and contributors for Roger and his team at Pardue Grains.