Home › Is the Latest Tech too Intimidating? Oliver’s Engineering Dept. can Help

Is the Latest Tech too Intimidating? Oliver’s Engineering Dept. can Help 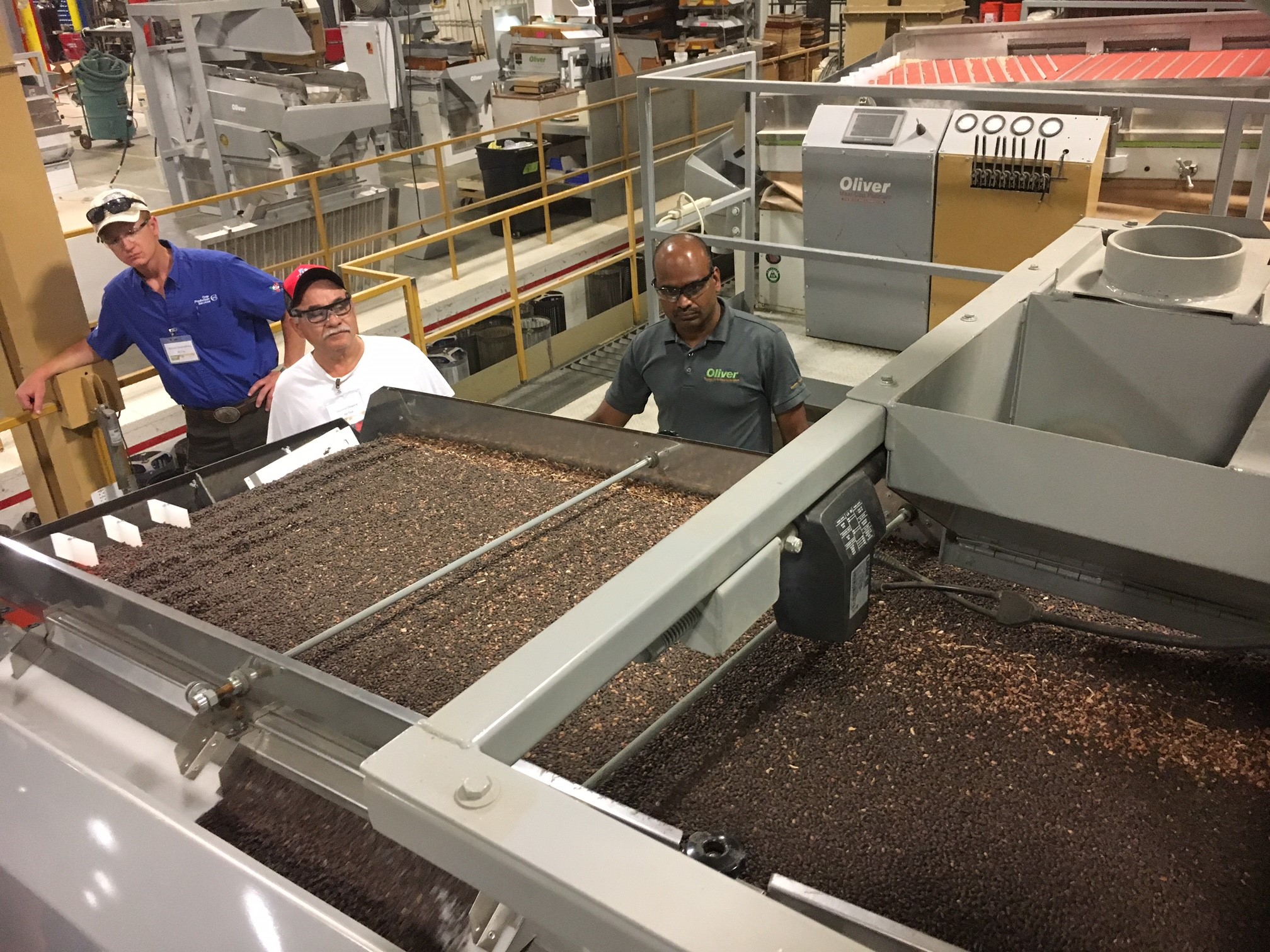 It was all hands on deck for Oliver Manufacturing’s engineering department as three representatives of Crop Production Services (CPS) visited company headquarters. They drove for about six hours from Levelland, Texas to meet with Engineering and explore the possibilities of upgrading their equipment.

CPS currently processes cottonseed on a Hi-Cap 240 Gravity Separator, which Cody Poage, Cotton Operations Manager, was mightily fond of. In fact, Poage seemed mostly content with that nearly 40-year-old machine. So much so that he wasn’t sure if he would be leaving with a new model at all.

“What we’re here to look at today is, do we want the old 240? Or the 1020? That’s really what we’re more after,” says Poage. “We believe in the product; Hell, we’ve been using it for 36 years. But we were very impressed with the new one. Not to take anything from the 240, because it is a great machine, but I think that you’re moving to the next generation when you get this other machine.”

Poage’s experience resembles those of many of Oliver’s long-time clients. As he points out, decades-old equipment functions well as long as it’s routinely maintained. But clients who are comfortable with older machinery often don’t realize the gains to be made from updating to newer, more technologically advanced models. Which makes sense; the HMI (Human-Machine Interface) touchscreen technology alone can appear pretty daunting to someone with no experience with it. But as Poage and CPS discover, the technology present on Oliver’s Voyager series is incredibly easy to work with.

Engineering gave CPS a hands-on demonstration of the Voyager GVX 1040 Gravity Separator, first released in 2011.  The Voyager series made massive leaps in separation quality and ease of use, features that long-term clients such as Crop Production Services may not be aware of. After experimenting with the GVX 1040 first hand, Poage realized how efficient newer Oliver models are.

He is particularly impressed by the Voyager’s fan adjustment capabilities and HMI, stating, “What we really liked about the new one, to us, was that the individual fans that you can adjust is very intriguing as to how we’re gonna’ be able to take just a little bit of incremental fan speed, and make it an even more precise machine. That is very, very neat. I think that’s one of the best things I really liked about it. The individual fan speed that you can speed up, slow down. You know the other thing would be the way that you can . . . the electronics. Once you clean the table off, it will go back to the spot that you had it set at.”

Poage is also happy with the HMI’s ease of use. Prior to the demo, he was worried that upgrading to a more technically advanced machine would be too daunting for his co-workers. His worries quickly disappeared, however, when he saw how little trouble they had interacting with it.

Poage: “You know at first I thought, well, the basic computer is really what we’ll need. I don’t want anything hard, I don’t want anything for these guys that scares them or anything . . . [The man] we brought with us, he’s my main plant guy. And he’s not a computer guy, he doesn’t do a lot of that. So when we brought him, he didn’t think there was any problem learning that system. Wasn’t scared of it, so that was a big plus to me.”

After just four hours with hands-on guidance from Oliver’s engineering department, Poage had full confidence in the control offered by the Voyager series. So much that he decided to upgrade to the Voyager GVX 1050. It was probably an easy choice: the GVX 1050 meets the capacity requirements of the CPS facility, and it provides a more intuitive workflow with its HMI’s ability to save processing settings such as fan speed, deck side tilt, product capacity and more. This of course means CPS will spend less time fine-tuning their gravity for specific daily production goals, and more time actually reaching – and perhaps surpassing – those goals.

Poage arrived at Oliver Manufacturing that morning content with getting a mint Hi-Cap 240. Thanks to the knowledge and experience of our engineering department, he left with a greater understanding of how the Voyager series optimizes the seed separation process.